It might surprise you to know but Inheritance Tax (IHT) is starting to become more of a concern to many people, the main reason for this being rising property prices. 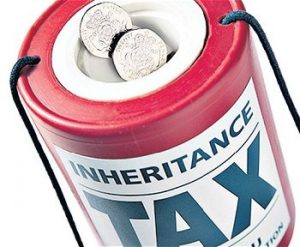 Most estates (the assets you leave when you die) are still not charged with Inheritance Tax, as the total value is not high enough, but more estates are being dragged into the IHT net because of increasing property prices. However, with sensible planning a lot can be done to mitigate the effects of Inheritance Tax.

Exempt transfers
There are a lot of gifts that are exempt from IHT, the more common ones being…

– Small gifts to any person in a tax year not exceeding £250.
– Gifts in consideration of marriage; £5000 if made by a parent of one of the couple; £2500 by a grandparent and £1000 by anyone else.
– Gifts that are part of your normal expenditure out of income and which don’t reduce your net income below that required to maintain your normal standard of living.
– Annual transfers up to £3000. Any unused amount may also be carried forward for one year only.
– Gifts to charities and registered community amateur sports clubs.
– Gifts to political parties.
– Maintenance payments to ex-partners.

How IHT is calculated
There are two types of gifts or transfers that can be made during your lifetime:

– Those immediately chargeable to IHT (or would be if not covered by an exemption), which are known as chargeable lifetime transfers and
– Those that are exempt from IHT unless you die within 7 years of the gift, (known as Potentially exempt transfers or PETS).

A running total is kept of chargeable lifetime transfers and no tax is payable on these or your wealth at death until you exceed the IHT threshold. This is £325,000 for 2014/15 and is frozen at this amount until 2017/18. The value of gifts or assets up to this threshold is commonly known as the nil rate band.

The excess above the nil rate band is taxed at 40% on death, although chargeable lifetime transfers are taxed at 20%.

Any liabilities you have on death as well as funeral costs are deducted in arriving at your estate to tax.

Husband and Wife (or civil partners)
No Inheritance Tax is payable on gifts between spouses or civil partners as long as both parties are domiciled in the UK. This is often used as a basic method of IHT avoidance. If the gift is a transfer to a foreign domiciled spouse it is only exempt up to £55,000.

There is a maximum of an amount equal to the nil rate band in force at the time of the second death that can be used in addition. Therefore, it doesn’t matter how many ex-spouses or civil partners there are, it is not possible to have a total nil rate rate band of over 650K in 2014/15.

Potentially Exempt Transfers
Most transfers to individuals are PETS and so are only subject to IHT if you die within 7 years of making the gift. Even at that stage IHT is only payable if the value of the transfer is over the IHT threshold when it is added to the estate at death plus other lifetime transfers made in the previous 7 years.

So giving your assets away and hoping to live 7 years is the most basic form of IHT planning, although does of course mean you have lost control of your assets. There is no need to report the gifts when made, but the recipient of the gift should do so within a year of the donor’s death.
The amount of IHT due on the gift is tapered away for gifts made between 3 and 7 years before death.

Chargeable transfers
Gifts made to most trusts and companies are chargeable transfers. These can produce an IHT charge at the time the gift is made at the rate of 20%, if the total cumulative value of these transfers exceeds the IHT threshold.

Gifts with Reservation
Giving away an asset such as your home does not automatically exempt you from inheritance tax should you live 7 years after the gift. While you are still living in the property rent free it is treated as a gift with reservation and the gift is ignored for IHT purposes. However the gift is recognised for capital gains tax purposes, so you can end up with the worst of both taxes; a property legally in the hands of someone else but treated as yours for IHT while you live there. You can avoid the gift with reservation rules if you pay a market rent for occupying the property.

Pre-Owned Assets Tax (POAT)
The pre-owned assets tax was introduced from 6 April 2005 to charge income tax on the benefit of using an asset for free which you had previously owned at some point since 17 March 1986. It can apply to the use of property or to valuable objects, such as paintings, but also where the asset has been purchased with cash you have given to the owner of the asset. The charge only bites if the benefit of using the asset is valued at more than £5000 per year. If the asset is included in your estate under the gift with reservation rules, the POAT charge does not apply. You can elect for the asset to be included in your estate and potentially be liable to IHT to avoid an annual POAT charge.

Payment of IHT?
On death IHT is payable 6 months after the end of the month in which the death occurs. The personal representatives of a deceased’s estate has to pay any tax they are liable for at the time of probate, even if it is before then.

The IHT due on certain qualifying assets including land and business interests can be paid in equal yearly instalments over 10 years.

Life Assurance
If you have a life assurance policy and the payout goes into your estate it will form part of your estate for IHT purposes. However, if the policy is written in trust for the beneficiaries it is possible to avoid this and it is simple to do.

Policies can also be taken out to cover the IHT due on death.

Using trusts to avoid Inheritance Tax
Trusts do require expert advice to be set-up, but they can allow you to give money away to avoid IHT whilst still keeping a certain amount of control.

How we can help
JRW can advise you on your potential exposure to Inheritance Tax and on the planning you can put in place to mitigate the effects of it.  Contact JRW directly on 01450 372267 or make an enquiry online.