It’s hard to believe but JRW will turn ten years old this April.

Formed in 2007 by the merger of two of the oldest accountancy firms in the Borders, with the combination of the experience of the James Rosie partnership (1921) from Galashiels and Welch and Co (1924) from Hawick. 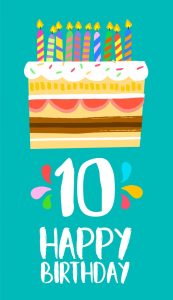 Happy Tenth Birthday
In the last ten years of JRW as a single entity, there has been a fair bit of change in just the last decade too, both for the firm and of course further afield too!

Main events in the last 10 years
2007 – JRW formed from the merger of the James Rosie partnership with Welch and Co.
2007 – Apple launches first iPhone
2007 – The first ever tweet on Twitter!
2007 – Smoking ban in the UK was introduced
2008 – The global recession started with markets crashing around the world
2008 – Barack Obama was elected as President of the United States
2014 – Scottish Referendum on Independence took place
2014 – JRW celebrated 90 years from when one of the founding partners Welch & Co were formed
2015 – New Borders Railway was launched
2016 – JRW opened first Edinburgh office on Castle Terrace.
2016 – Britain’s referendum on leaving the EU
2016 – President Trump Elected
2017 – JRW turn 10 year’s old

As you can see a lot has certainly happened in the last 10 years and who knows what will happen in the next decade, but as we celebrate our tenth birthday here’s to the next ten years and beyond.