As well as the more obvious practical differences, the difference between a company van and a company car also has an impact on your tax bill.

But in March 2019 the Upper Tribunal upheld two differing decisions over ‘combi’ vans provided to employees for private use. Kevin Crowford discusses the tax implications and brings you up to date with this important ruling which could affect your company vans. 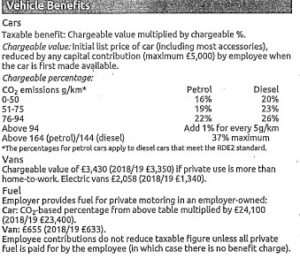 First things first let’s look at the taxable differences. Company cars are taxed on a sliding scale, based on a combination of list price and CO2 emissions, whilst the tax rates for vans are far simpler. A company car will generate a benefit in kind based on a percentage of the list price depending on the emissions the car generates, if the car is available for your private use. This benefit in kind is then taxed at your usual income tax rate.

However, if a company van is used, a flat rate benefit in kind is applied, again assuming that the van is available for private use. Also, unlike cars, if your van is only used to transport you from home to work (and this can be proved by reference to mileage records), there is no benefit in kind at all. However, if you do drive a van for what is defined as ‘private usage’ you will be required to pay Benefit in Kind company van tax.

As you will see there are factors to consider depending on how you use your van, HMRC will want you to pay different kinds of tax on it. There are many different types of vehicles that are registered as vans and it can be difficult to determine how much tax you should pay.

Clearly, as an employee choosing a car or van or an employer who is providing it, you need to know about its exact specifications and definition as far as HMRC is concerned. Here is HMRC’s definition of cars and vans, obviously this is important when making your choice of vehicle.

A car is constructed mainly to carry passengers and is not a goods vehicle, whilst a van is a ‘vehicle of a construction primarily suited for the conveyance of goods or burden of any description’. However, cars become vans for tax purposes when they are ‘car derived vans’ or ‘combi vans’.

‘Car derived vans’ are cars that have been converted, either by the manufacturer or a vehicle converter to sell as a commercial vehicle e.g. rear seats and seat belts removed and a floor panel added to make a load area.

‘Combi vans’ generally are vans with rear seats where the main use of the vehicle is for carrying goods rather than passengers. There is a list of manufacturer constructed ‘car derived’ and ‘combi’ vans on the HMRC website which defines cars or vans.

Clearly, as an employee choosing your car/van or an employer providing it and you need to be certain of its specifications and its definition as far as HMRC is concerned. Especially in light of the recent Upper Tribunal Ruling over the correct treatment of VW Kombi vans and Vauxhall Vivaro vans provided to employees. This could affect your company vans.

Upper Tribunal ruling
The Upper Tribunal was asked to confirm the First-tier Tax Tribunal’s ruling over the correct treatment of VW Kombi 1 and Kombi 2 vans and Vauxhall Vivaro vans provided to employees.

At first sight each looks like a van and HMRC would usually accept that they are. However, they were modified and so the test was whether the changes resulted in the vehicles no longer being “primarily suited for the conveyance of goods”. The Upper Tribunal upheld the decision that the modifications to the Vivaro did not prevent some cargo still being loaded into the passenger area. The Vivaro therefore remained a vehicle primarily suited for the conveyance of goods, i.e. a van.

However, while the modifications to the VW Kombis were not much different to those for the Vivaro, when the removable seats behind the driver were in place it prevented reasonable use of the area for transporting goods and when the seats weren’t in place the area wasn’t suitable for passengers. So, the Upper Tribunal upheld the decision that the VWs were equally suitable for carrying passengers and goods. As not “primarily” goods vehicles, they should be classed as cars.

JRW ADVICE
Just because a manufacturer deems it a commercial vehicle, this doesn’t mean that HMRC will too. You must check the vehicle specification in detail to make sure the goods area is larger than the passenger area before deciding on your next company van.

Although a vehicle may look like a van, if it’s not primarily suited to carrying goods, HMRC will class it as a car. This will result in much more tax for the driver and a higher NI bill for the company.

For advice and clarification, please get in touch with one of the team at JRW.