One of your employees has asked if he can give up some of his salary for extra holiday. You’re aware that there are special tax and NI rules for sacrificing pay for benefits. How do they apply in this situation? Brona MacDougall advises. 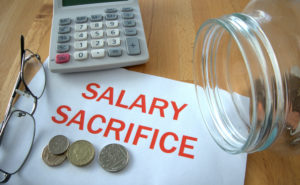 Since April 2017 where you offer an employee the choice of less pay in exchange for a benefit in kind such as a mobile phone, it becomes an ‘optional remuneration arrangement’(OpRA). This cancels out any tax and NI advantage that might result from the salary sacrifice.

For example
Susan, a higher rate taxpayer, takes up her employer’s offer of a mobile phone package worth £720 per year instead of salary of an equal amount. Because an employer can provide one mobile phone as a tax and NI-free perk, before the OpRA rules this would have saved Susan £302 per year – Tax (£720 x 40%) + NI (£720 x 2%).

It would also have saved Susan’s employer class 1A NI of £99 (£720 x 13.8%). The OpRA rules now mean that Susan will be taxed on a benefit in kind equal to the greater of the salary she gave up and the benefit that would be taxable if it weren’t exempt. In this instance the two figures are the same, i.e. £720.

Exempt or not?
Several types of benefit are exempt from the OpRA rules. However, salary given up in exchange for extra holiday isn’t on the list. But does this mean you must work out the taxable value of the benefit the employee is apparently getting, and if so how.

No monetary value
While extra holiday might be very valuable to, say, parents with a young family, you can’t put a price on it, it has no intrinsic monetary value. Whilst it might cost you lost sales the employee might have generated had they been at work, or result in extra costs because you have to employ a temp to cover, these are only side effects – in reality there is no direct cost involved.

HMRC’s view
While there’s no legislation that specifically excludes extra holiday from the OpRA rules, neither is there any HMRC guidance. Its consultation paper published before the rules were introduced said that there was no intention to apply them to optional unpaid leave.

JRW ADVICE. Instead of docking employees’ salaries for the pay periods in which they take extra holiday, you could spread the deduction over the holiday year. As well as helping employees this can reduce NI costs for you.

IN SUMMARY
The special rules for salary sacrifice don’t apply to extra holiday, HMRC’s view is that unpaid leave allowed by an employer is not a benefit in kind as it has no monetary value, even where there’s a cost to the employer for allowing it. Employers can save NI and pension contributions by allowing unpaid holiday.